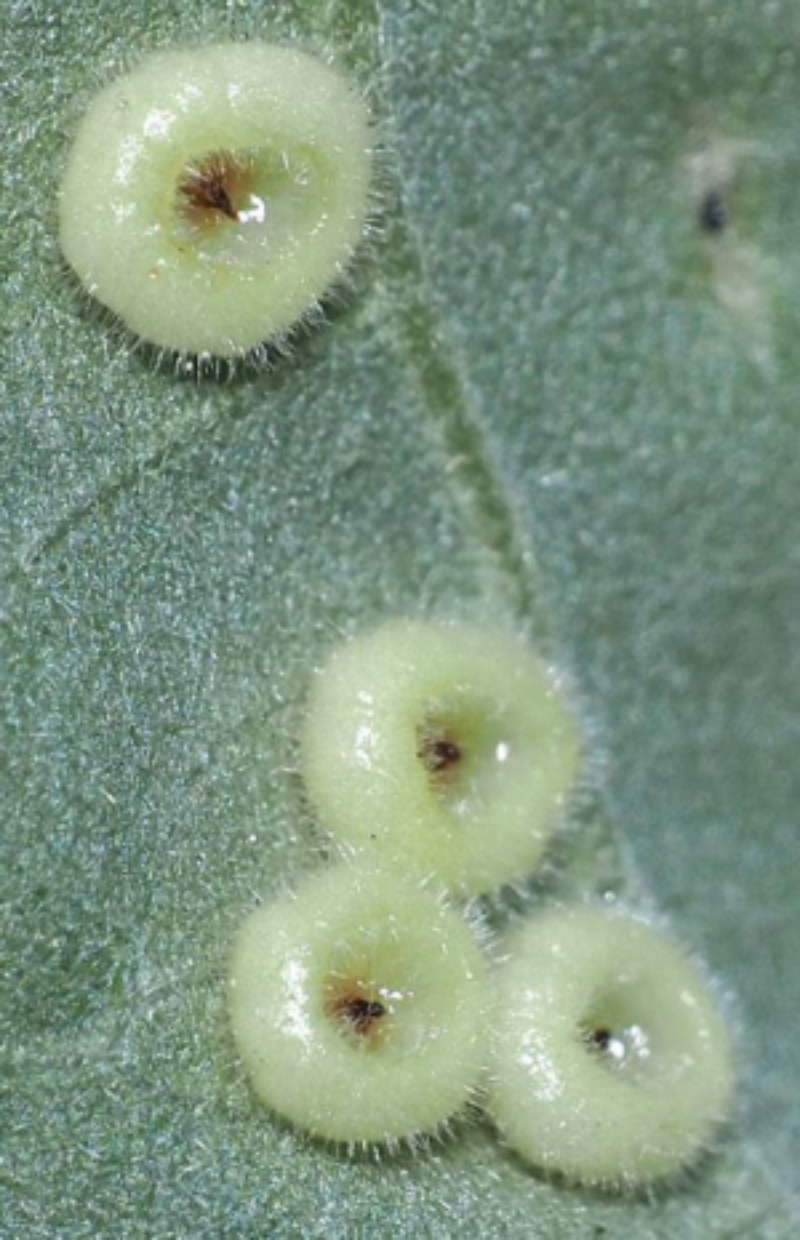 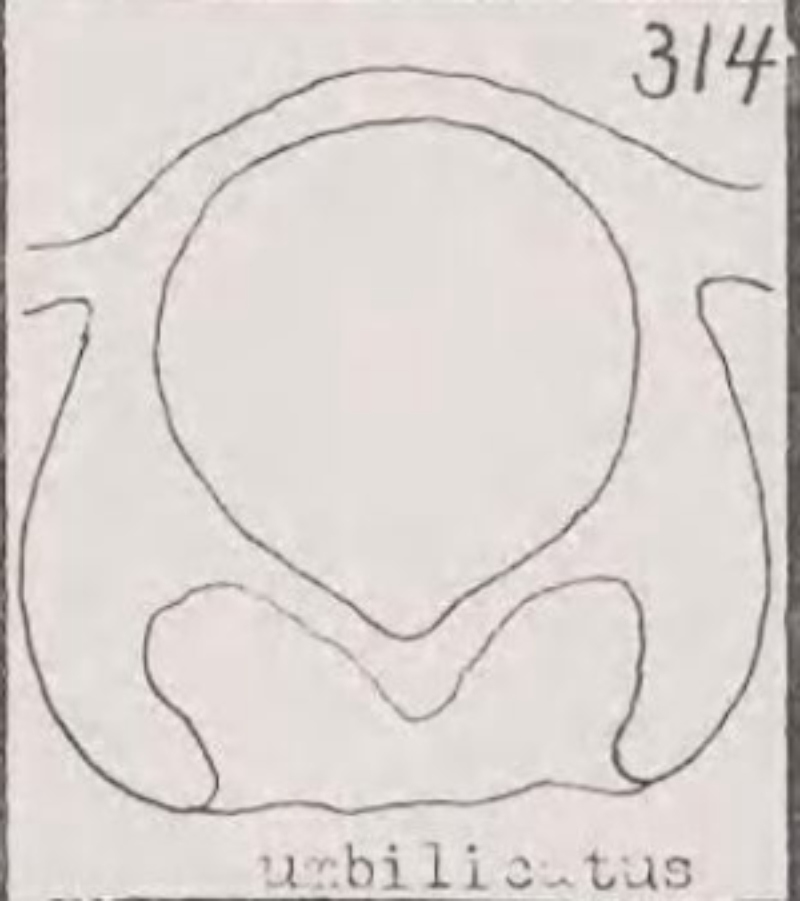 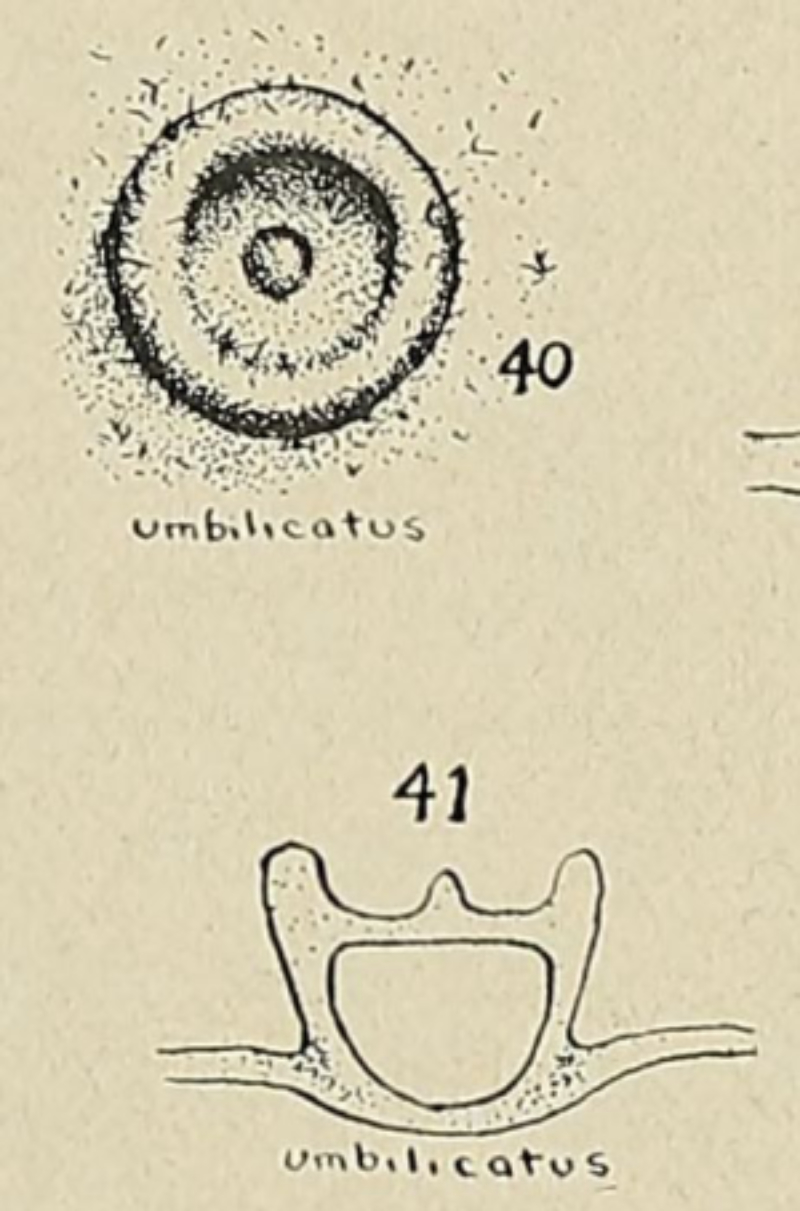 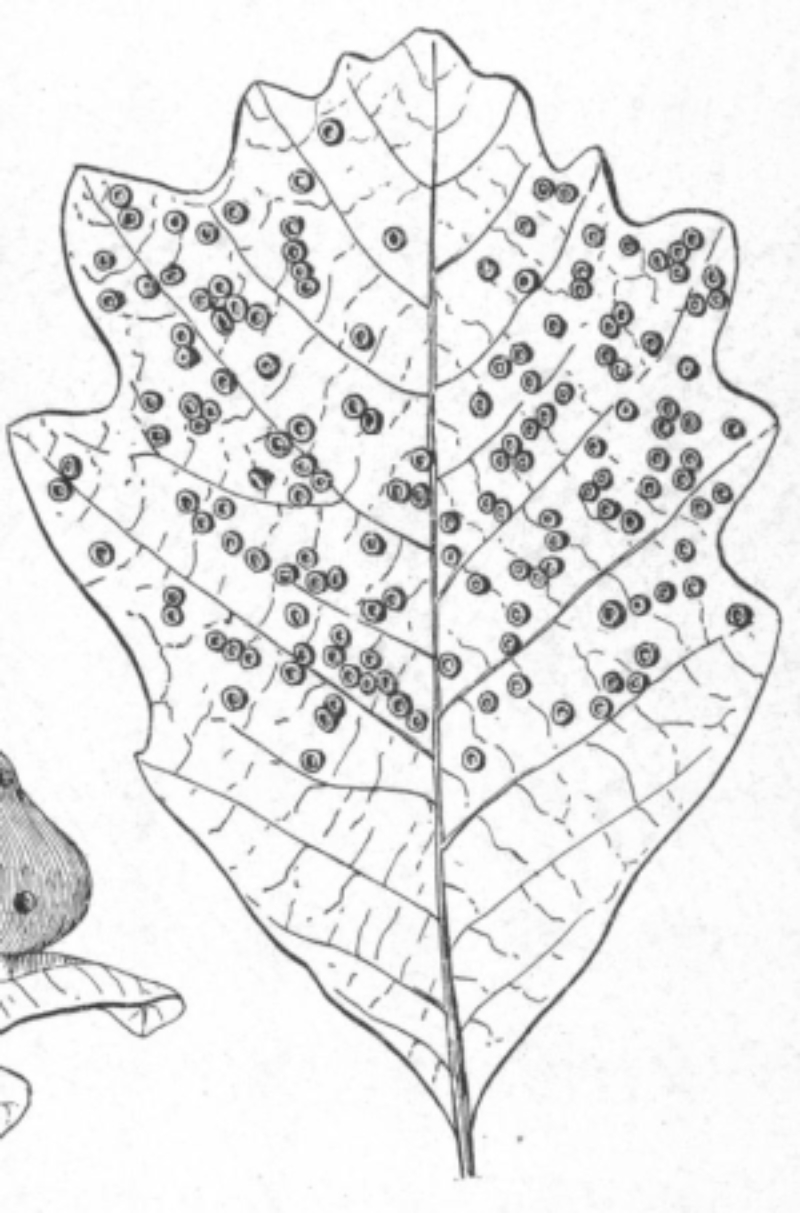 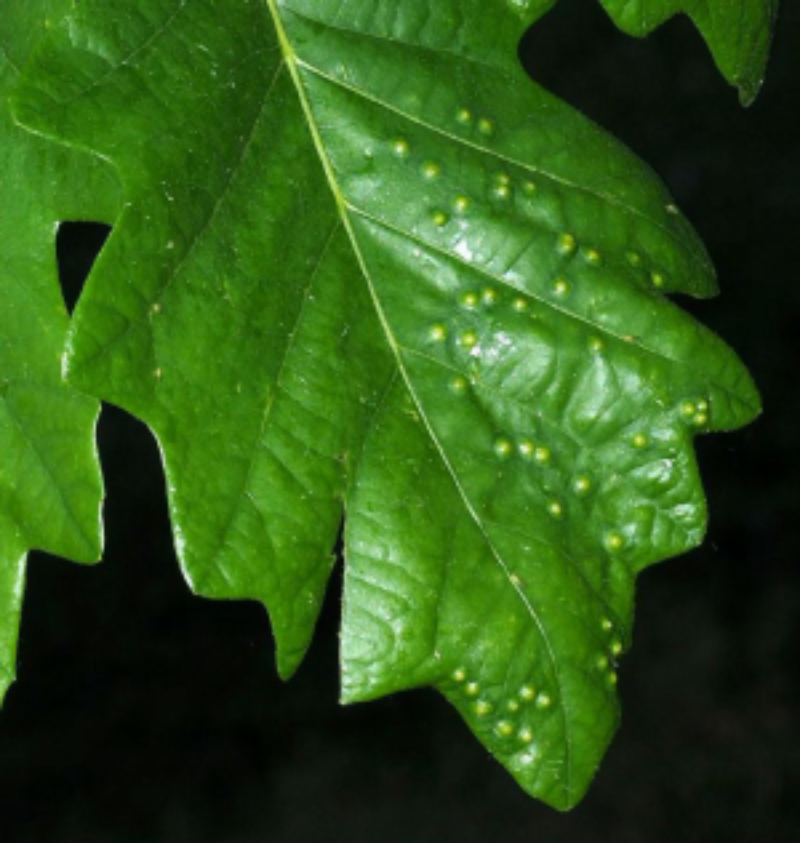 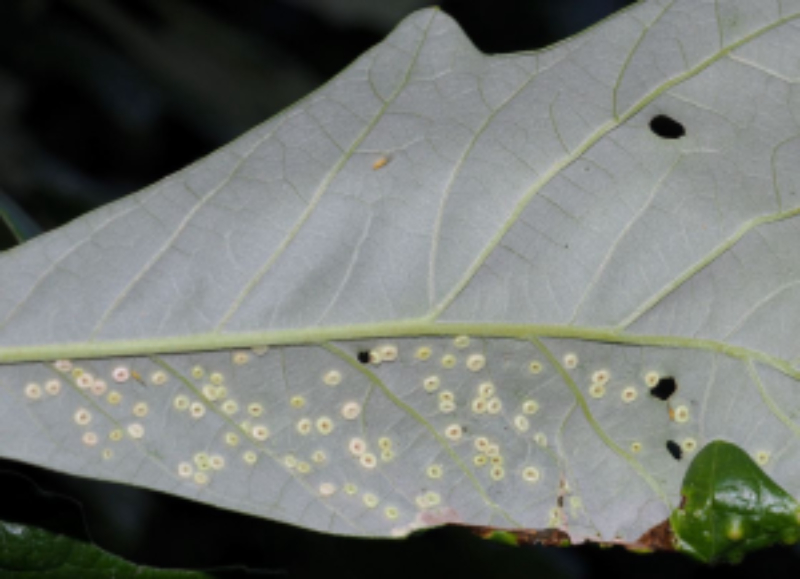 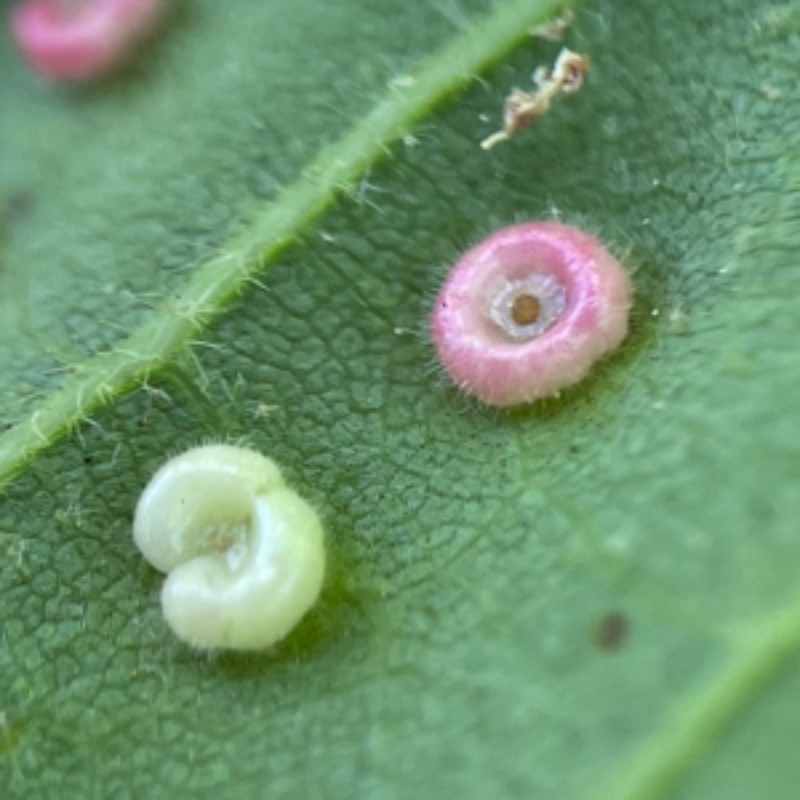 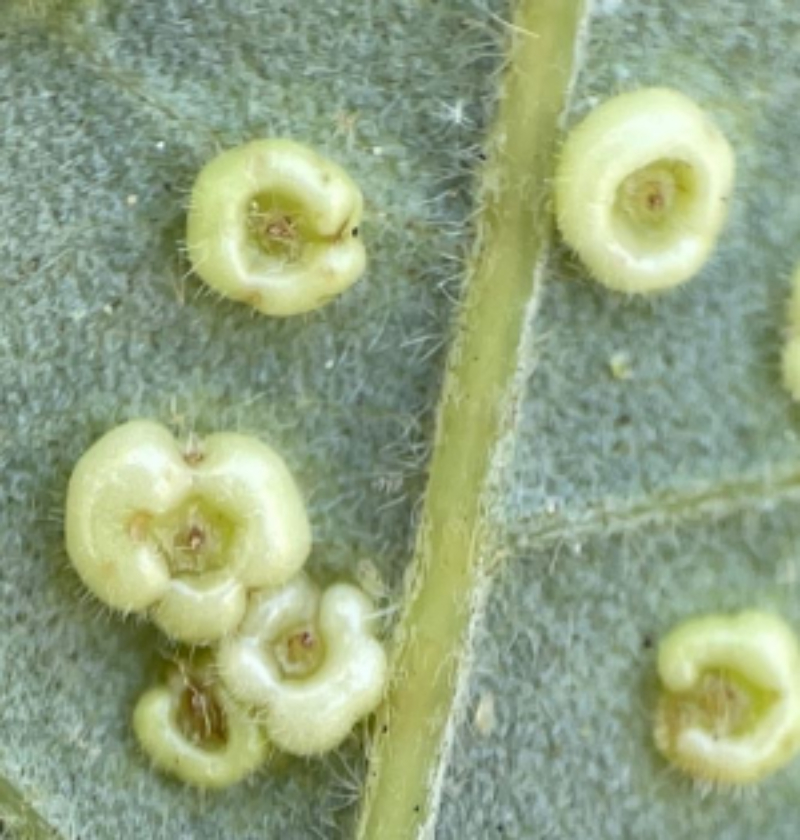 Our ID Notes may contain important tips necessary for distinguishing this gall from similar galls and/or important information about the taxonomic status of this gall inducer.
The Gall Wasp Genus Neuroterus
“

GALL. — Small, separable, saucer-shaped. Each cell monothalamous. Up to 1.0 mm. in diameter, strictly circular, flattened, centrally depressed, with a low rim, a minute point in the center of the depression; light green, becoming brown; rather densely covered with short hairs; attached by rather a broad point, but quite easily separable, hardly at all imbedded in the blade, but indicated on the upper surface of the leaf by a slight papilla surrounded by a considerable circle of discoloration. Internally entirely hollow, without a distinct larval cell. On the under surfaces of white oaks, commonly on Quercus bicolor (the type variety), recorded from Q. michauxii (acc. Felt), Q. macrocarpa (acc. Jarvis), and Q. stellata (Patterson coll.). Figs. 40, 41.

The gall of this species is very common, and a familiar object to all who have hunted galls in the northeastern part of the United States, but the insect is so difficult to rear that, as far as I know, no one has yet accomplished it. Bassett’s type material was obtained by cutting mature adults from galls and by capturing them as they were flying about the oak trees to oviposit. The galls of this agamic form are found on the leaves in late summer, but do not mature until very late in the fall as the leaves are falling. Most of the galls have by then become detached from the leaves, and are soon lost on the ground. By sifting the soil, sand, and leaf-mold, Bassett succeeded in the spring in obtaining galls which contained living wasps. The growth of the insect is probably very dependent upon moisture and temperature conditions of the sort found on the ground thruout the winter months, and the minute galls, with their thin walls, dry out very soon after collecting, explaining the difficulties in breeding the insect. Bassett found insects of this species in numbers over an oak, on a warm spring day, ovipositing in the buds of the tree. He further states that ‘In the latter part of May and the beginning of June the young galls were nearly full grown and as abundant as ever before.” This last must apply to a spring generation, for the galls of the agamic form are not mature until September or later; and inasmuch as Bassett failed to differentiate the spring galls it would appear they are similar to the agamic galls, similarly placed on the leaf. The insect of the spring form may be agamic (as with the closely related saltatorius), or bisexual as with other species of Diplobius, and it will be interesting to determine this definitely. These data have been published for twenty-three years, but have apparently been overlooked as a record of heterogony.

The type variety is on Quercus bicolor, and the records for other hosts will prove to represent distinct varieties. The type locality is in Connecticut. The Ontario, Illinois, Mississippi, and Texas records will undoubtedly represent as many distinct varieties. The oaks, Q. bicolor, Q. macrocarpa, and Q. stellata, belong to a single group, but Q. michauxii belongs to the group of chestnut oaks. If the last record proves correct, the insect would appear to occur on species of both white and chestnut oaks over all of the eastern half of the United States, with a possibility of upward of 80 varieties. Mr. Frank A. Leach has collected a very similar but slightly different gall on Q. lobata and Q. douglasii from localities in central California; it is possible these will prove varieties of this species, extending its range over the whole of the United States.

The monothalamous, rather separable gall, connects this species with saltatorius, and the insects of the two are so nearly alike that they can hardly be separated. Here is another case of physiologic species, and a rather remarkable instance inasmuch as the galls of the two are very distinct. When we have discovered a larger number of varieties of each species, we may be able to perceive the specific characters more clearly.